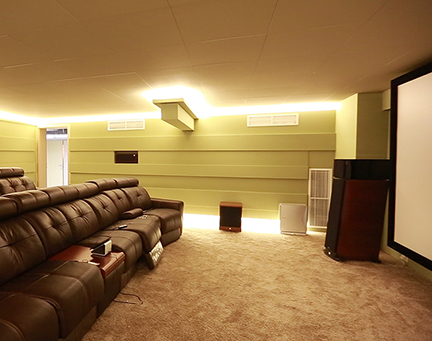 Requirements and client’s feedback
The main requirement of the client was to create a supreme contemporary automation system of the flat with the АМХ equipment installed by the previous integrator.

At the moment the client is fully satisfied with the work and wants to proceed with expanding the system functions.

Project description
In the scope of the project the client asked to do refactoring of the automation system installed in the flat by the previous company and to automate new rooms added to the flat. Total area of the flat is more than 250 m2 (14 rooms) and added rooms have the area of more than 150 m2 (7 rooms).

Implementation stages
The EST company entered the project on the stage of adding new rooms to the flat.
On the first stage the client set the task to automate the added rooms: cinema, gym, lounge, room for collection of wine samples and three service rooms: server room, air chamber and storage room.

On the first stage we successfully implemented control of Home Theatre. We also implemented the multi-room system in the gym and lounge and automated lighting control. As all added rooms don’t have natural daylight the lighting control was implemented there on the basis of presence sensors. For that the client provides us with the required equipment which was installed in the server room. So by the end of the first stage we created a separate automation system of added rooms without any connection with the existing automation system of the flat. It was decided to use Apple iPads with installed iRidium as control panels.

After finishing the first stage the client set the task to move all equipment from the former server room to the new one and to adjust the existing automation system in the flat for work with new equipment. At this stage automated lighting control was implemented. In the rooms without windows lighting was implemented with the use of presence sensors. The same sensors and the astronomic timer were used when implementing the system of night lighting. Control of the multi-room system in the living room, four bedrooms, the study, the play room, clothes room and the bedroom was implemented. On this stage shutters control in 7 rooms was implemented. For convenience of hosts and house guests work of intercom on the basis of the SIP protocol and remote opening of the front door with the use of electromechanical lock were implemented.

On the third stage the client set the task to implement the system of climate control as he was not satisfied with the work of the existing climate system. The company developed and implemented the PID method of temperature regulation. The method is based on use of data received from temperature and moisture sensors which are installed in each room.
More Less

The client was very dissatisfied with the automation system implemented by the previous integration company. There were regular problems with system functioning which were very difficult and time-consuming to solve.
The company had the task to create the system on the contemporary level of reliability as the system was installed 3 years ago before we entered the project and to automate the rooms added to the flat.

Two first successful stages let us set a new task – to enhance comfort by optimization of the climate control system of the flat.

The main challenge of the project was to examine the existing automation system implemented by the previous integration company without any documentation. It was also challenging to use the existing communications and technical solutions for new tasks. For our company it was the first automation project and many resources were involved in R&D. Besides, very often solutions used in development of information systems didn’t work for automation systems.

One more thing we faced is a mistake when selecting a project architecture solution. On the first stage it was decided to implement the part of logics responsible for controlling the multi-room system on iRidium panels. And it worked well on the first stage: three rooms with the multi-room system were implemented fast and operated perfectly. The problem occurred when eight more rooms had to be added to the system: the process of data synchronization between panels didn’t work the way it was supposed to. So the decision was made to implement the logics on the AMX controller. It solved the problem but required refactoring of the controller program core for improving its efficiency.

Further development of the project can be held in the direction of comfort enhancement.
For example, it is possible to implement intercom telephony inside the flat and output of calls on phones on any of the control panels. It is also possible to increase security. For example, there might be solution for monitoring emergency situation included in the system.

Besides solutions for improvement of cost effectiveness of maintaining the flat is possible. For example, automatic switch off of devices when nobody is present.
More Less